Escape Room:
​The Case of the Empty TOmb

On this Page: FAQ - General Pieces - Clues - Briefcases and Locks - Decorations - Promotion - Resources
On this page you will find instructions and pieces that you will need for a DIY (Do it Yourself) Resurrection themed Escape Room for your youth group or family as they solve puzzles and clues to solve the Case of the Empty Tomb. You could also just do the clues for one or two of the theories listed below and talk about that, if you don't have time to do the full Escape Room.

(To have NETworkers TEC come to your group to SET UP this Escape Room, CONTACT US for availability and questions.)

What is an Escape Room?
An Escape Room is a puzzle challenge where participants are “locked” in a room for 1 hour and must solve a series of clues in order to successfully “escape” within the time frame. It is kind of like a scavenger hunt.

What is the Purpose?
To help attendees investigate, in a fun way, whether or not there is evidence to back up Jesus' resurrection.
Where does the material come from?
The clues were created by Hanna w/ NETworkers TEC. The source of the content for the clues come from the booklet Alive by J. Warner Wallace from Cold Case Christianity.  He is a cold-case homicide detective and approaches the case of the empty tomb from a detective's perspective.
Are participants really locked in a room?
No. The idea of being "locked" in a room just adds to the mystery and pressure of solving all the puzzles and clues in time to "escape."
Do you have to have prior knowledge, be a Christian, or familiar with church to participate?
No, the clues are written so that anyone can participate and learn from the game. These puzzles and clues can be solved by students as young as upper elementary; the Escape Room style also works for families of all ages to do together.
How long does the event take?
Suggested time: 1hr and 45 minutesIf you were doing this in a setting where you would see the participants again (like in a youth group) you could do the teaching segment of the Escape Room the week(s) before or the week(s) after.

You could also focus on one theory each week if you were doing this as a family devotion or over a period of time with a youth group.
How many people can play at a time?
Recommend: 6-8 players per room so that everyone stays engaged and players do not become uninterested. If you have more than 6-8 players, it is recommend that you set up multiple rooms (with the same information) for your players to participate in. It can be a race, not only against the clock, but also against the other teams. To help players stay engaged, it is recommend that most of the players are given a job which are discussed in detail under the "General Pieces" section below.
For whom is the Escape Room Designed?
Any group of people (youth groups, homeschool groups, young adult groups, church groups, families, etc.). The Escape Room game is flexible whether you are wanting to do it in your house with your family or at a church with a youth group. You could even consider setting up Resurrection themed Escape Rooms to make open to the public or groups in your area if able.

Role Tags
(There are 5 different optional roles that you can have available for the participants to keep the players engaged and to help delegate responsibility so that one or two people are not over-stepping on others. You could make badges like these pictured below or use stick on name tags.)
​These two roles are to be filled by those running the Escape Room.
Clue Board
(You could have a clue board that the participates can put their clues on during the game. This helps them to keep all the pieces in one place and allows all the players to see the clues versus one person holding on to the clue and not allowing the other players to read the clues. This board can also be taken into the Concluding Discussion to refer to during the discussion. You could use a white board, foam board, or poster board.) 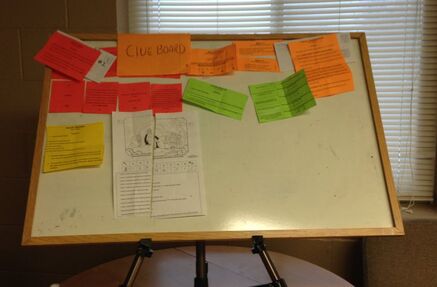 Below are the clue files that need to be printed and cut for each theory. Within the clue files are instructions for what kind of props could be used to accompany the clues and the pictures illustrating the suggestions are below. You can change the objects/supplies to fit supplies you already have or do something you feel would work better.

Suggestions: Print each clue set on different colored paper so that it is easy to keep each theory's clue set together (Example: Theory #1 = Red paper, Theory #2 = Orange paper). Laminate the clues for durability.
12 Envelopes
All the briefcase needs two envelops; one labeled "TRUE" and the other labeled "FALSE". The clue documents will tell you what should go in the appropriate envelopes. To see pictures of suggested briefcases, see the "Briefcase and Lock" section farther down. The envelopes go inside the briefcase so that when the briefcase is opened, the participants have to decide which envelope to open to access the next set of clues.
Pictured below: Theory #1 clues hidden in a book written by a medical doctor.
​Pictured Below: Theory #2 "Power" clue taped on the back of a 1st place ribbon.
​Pictured below: Theory #2 "Relationships" clue is hidden on the bottom of a Valentine themed can with jewelry covering the clue. The key to the money box for the Theory #2 "Money" clue is taped to the top of the Valentine's lid.
​Pictured below: Theory #2 "Money" clue is taped on the back of a piece of fake money. All the money is placed in a locked box labeled "U.S. Treasury". The key to the box is taped to the top of the Valentine's lid from the Theory #2 "Relationship" clue. Or you could hide the "Money" clue in a coin bag with some coins inside.
Suggestion: You could print out the "Jesus and Disciples Picture" and "Disciples Death Chart" to hide or display as a "distraction" as they are not directly needed to solve "Theory #2" clues but are related decorations.
Combination Code: These numbers from the combination code (3, 6, 8, and 4) are hidden on the corresponding poem objects that show that the disciples did not hallucinate seeing Jesus. When you write the combination number on these objects, don't forget to also write #3 somewhere on the object to indicate to the players that this number goes with theory #3.
Pictured below are the objects that the participates are looking for that coordinate with the clue poem:
(1) Over 500 saw with their eyes. - Combo Code Number = 3
(2) And when the disciples touched him, they realized, - Combo Code Number = 6
That he wasn’t dead
(3) But since he was fed, - Combo Code Number = 8
(4) They knew the one they walked with was truly alive. - Combo Code Number = 4

(1) "Over 500 saw with their eyes." - The combination number (3) is written on the inside of the glasses and the glasses were hung on the bookshelf. 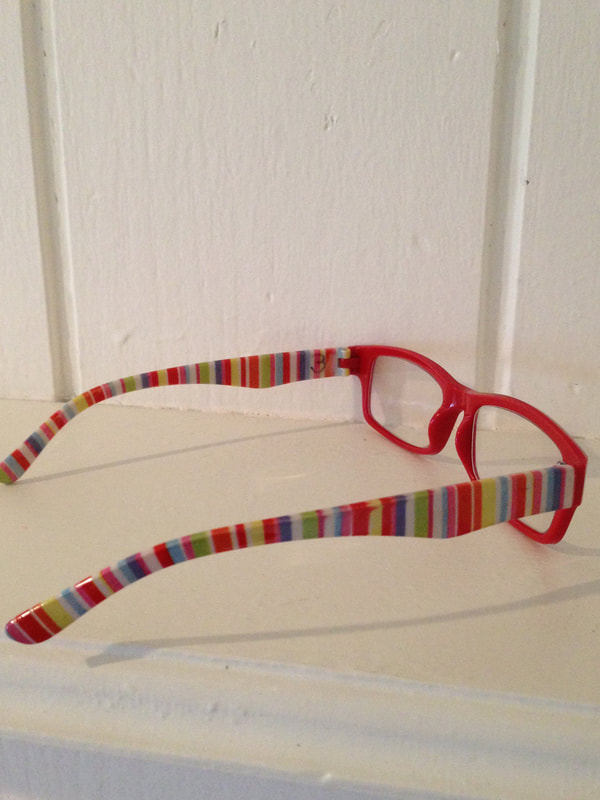 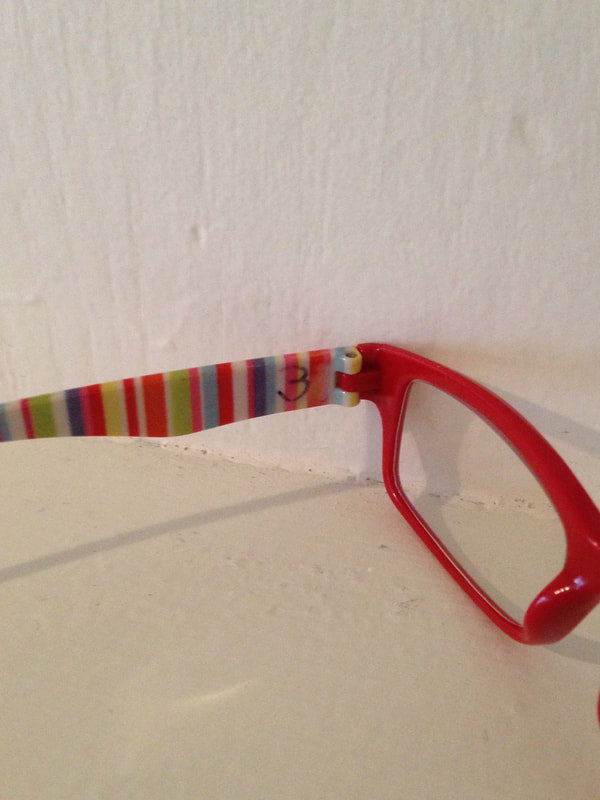 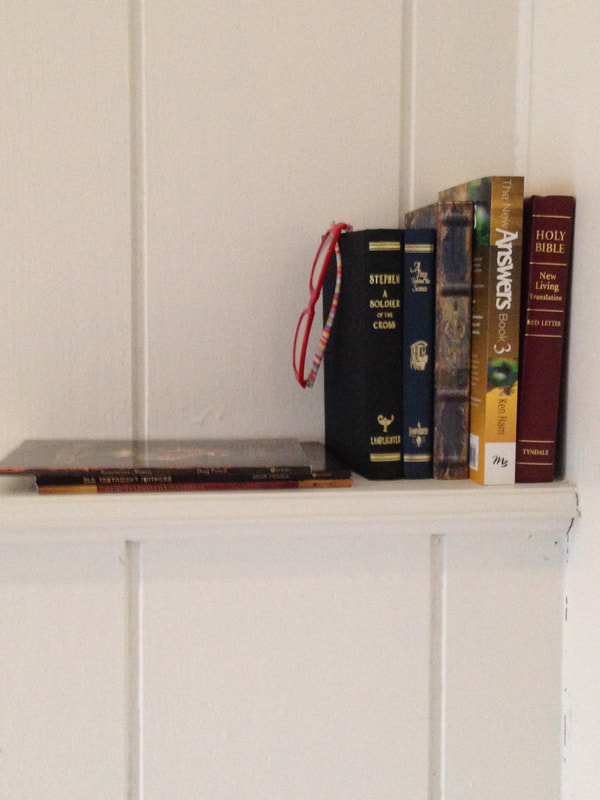 ​(2) "And when the disciples touched him..." - The object for this clue is a picture of the disciples touching the risen Jesus, taped inside a "robe" similar to what they would have worn during Jesus' time. The combination number (6) is written in "invisible ink" by a special pen that is revealed with UV light from the pen. I hung the pen on the picture to make it easier to find.
(3) "But since he was fed" - The combination number (8) was written on one of the fish in the Shark Bite game. Another type of fish could be used instead of the game like fish crackers, fake fish, lure fish, etc.
​(4) "They knew the one they walked with..." - This combination number (4) was written on the inside of the sandal.
Combination Code: The combination for this clue is a series of shapes. Three of the shapes are found on the clue picture in the clue file above and the last shape is found at 1 Corinthians 15:3-6. You will need to draw this symbol in each of the Bibles you provide so no matter which Bible the players use to look up 1 Corinthians 15:3-6, the correct shape will be there.

The lock that I bought (see "Briefcase and Lock" section further down) had sticker shapes that you could put on the lock but if you would rather use letters or numbers for your combination code, just change the instructions and shape clues on this clue picture found in the clue file above before printing.
Pictured below: You could use a fake book like the one pictured below to hide one of your clues.

Pictured below is a type of briefcase that can be used for this game. These work well because of their size and they cannot be opened without taking off the lock. These were purchased at Michaels.
You may use pre-programmed locks, but you would also have to change some of the clues to reflect the pre-programmed combination code. Therefore, it is suggested that you purchase locks that can be set to your own combination. These types of locks can be found at Target, Lowes, Office Max, etc. See more info below.
Theory #2 - I placed a star on the bottom of this lock as  a hint that the combination code from the "Theory #2" clue was the letters with the star underneath. If you wanted to use the Master Lock shown above instead of this type, you could do that as well.

You can make the Escape Room as elaborate and decorated as you want. When you set up your room you will want to be sure that you have enough distracting items in the room that are not clues for the Escape Room. This is part of the challenge for the participants to search and evaluate what is a clue and what is not. Don't leave too many of your clues in plain sight; part of the fun is looking for them like a scavenger hunt.

You can utilize whatever space you have available whether its a classroom at your church or room(s) in your home. You can decorate your Escape Room like a scene from the crucifixion or resurrection, a detective's office, crime scene, normal house/classroom, or whatever other type of theme you would like. Below you can see a couple different decoration settings and hiding places depending on the space available.

Below are recommend resources that can be used during your discussion time or for other lessons around this topic.
More Evidence about the "Case of the Empty Tomb" from cold case homicide detective, J. Warner Wallace Theory #1: Fainted Theory #2: Stolen Body and Lying Theory #3: Hallucinated  Theory #4: Add Later Theory #5: Wrong Tomb Theory #6: Resurrection7-Day Family Devotional
You May Also Like
© NETworkers TEC LLC 2022 - All Rights Reserved.